this week was a wet one! its been rainy and overcast all week long! but it was a solid first week of the transfer and we are excited cuz we have 2 greenies in our zone! one is actually Elder Green from Lehi, but i havent met the other yet.

monday we visited Fernanda (less active member) and Maria and her fam. We are still teaching Geovane and Angela and they are progressing slowly. I think Angela got a little discouraged because she wasnt able to be baptized with her mom because of her marriage situation and geovane is just kinda your average 21 year old. He loves LOL and video games so sometimes is a little hard for us to get his attention, i should probably ask mom and dad for tips hahaha. his baptismal goal is coming up soon and we are praying everything keeps getting better! this week president also gave us new goals and mission standards and something he spoke and has been reminding us about are our contacts. we have been doing more contacts than normal this week and its been super cool! we have talked to lots of new people and lots of interesting people and lots of people that thought we were interesting but lots that werent interested. life is about interests.

from tuesday forward is where the rain really got ahold of us. about 60% of our area is dirt roads so it was nice and muddy, and to make things better the days when it rained hardest were the days where people least answered the door! this week was also the 2nd/final round of presidential elections here in brazil and tbh the political season has really reminded me of trump hilary. its one of the only things people have wnated to talk about. this week we caught up with tainara and have been teaching her about the book of mormon. we have had some cool lessons with her and the other members of the family. she accepted a baptism date and was able to explain to us all about the chapter we left her to read. update on Neílson, we marked 2 different days with him but he canceled both days because of work things coming up.

friday morning we actually had a super cool lesson with taina and ornelia and fam about the restoration. they had been visited by the missionaries years ago but the missionaries just never showed up again! we had contacted ornelia a few days ago in the street but she didnt tell us the missionaries had visited her before. we had some visits planned in a different neighborhood but we felt strongly that we should try and go find her house, because she only gave us part of her address, once we arrived we had a really nice lesson and they accepted all our invitations that we made them. its so nice to see how the Lord guides us.

saturday we went to the baptism that the sisters had in the afternoon and we had family night at monicas home with her family and stella/thabata and stella gave the message! its been so cool to see her grow as a member since she was baptized just a few weeks ago and she gave a really nice message about the restoration and bore a nice testimony. it makes me so happy to see people change their lives for the better because of the teachings of Christ and living prophets. we also went to another area to do some baptism interviews for the elders!

sunday was also quite rainy. from 7:30-9 it was just downpour but we were able to get to church ontime with the less active family. unfortunately (becasue of the rain and the election, all brazilians are obligated to vote) not a whole lot of our investigators came out to church. this week i have been studying a lot in 3 nephi where Christ appears to the people in the americas. its so cool to read and compare with the scriptures that he references from the old testament and the teachings he gives that he had taught the Jews. there are subtle but interesting differences that give us a little bit of a different perspective or way to think about his teachings! and in chapter 27 he lays out so clearly his doctrine and the Fathers plan for us. it truly is a plan of hope and happiness!

love
Elder Prince
Posted by Karianne Prince at 11:51 AM 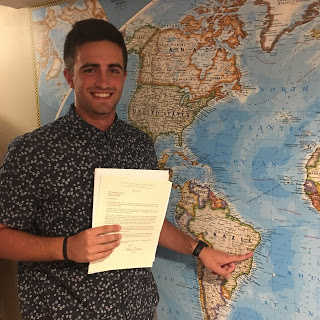